When developing our Lessons for Change, we had the opportunity to visit, work with and learn from activists in Capetown, Durban and Johannesburg during a period of political turmoil within South Africa.

The former President, Jacob Zuma, was under investigation for hundreds of counts of corruption. ‘State Capture’ was the buzzword to describe the day to day running of government, where wealthy businessmen dictated government policy and the hiring and firing of Ministers to line their own pockets.

Campaigns for equal access to education erupted into violence on the streets. Heavily armed forces patrolled the campus we visited at the largely white University of Stellenbosch, birthplace of the Apartheid ideology.

Millions of predominantly black and coloured South Africans struggled to exist, living in shacks and shanty towns all over the state without access to education, housing, employment or income.

The investigation was well underway into the Marikana Massacre, where state forces killed 34 protesters during a workers strike seeking better pay from Lonmin Mining Company.

And the African National Congress, the political party of Nelson Mandela, elected Cyril Ramaphosa, (former trade union leader turned billionaire businessman and board member of Lonmin Mining Company at the time of the Marikana Massacre) as its new leader and the 5th President of the Post Apartheid ‘Free’ South Africa.

In many ways Nelson Mandela’s dreams of freedom for the people of South Africa had turned to nightmares. 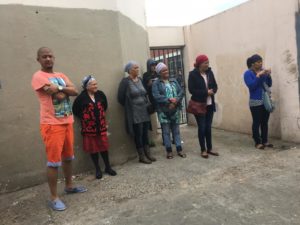 Yet, in the middle of all of that a new generation of highly conscious South African activists, ably supported and facilitated by the generation that came before them for whom equality and human rights were still the dream, campaigned every day to make change happen in every environment we visited. It would be easy to think of a nation of people demoralised and destroyed but that is not what we seen and heard and we produced this site to share the lessons we learned.

On Lessons for Change you can listen to interviews with inspirational people like Charnelle Camando fighting evictions in Capetown in the face of widespread gentrification or Ma’am Q in Kayelitshya campaigning successfully for jobs, sanitation, services and facilities in the now decade’s old ‘temporary’ township where she lives.

You can learn how Domestic Workers, like Myrtle Witbooi are organising to create accountability between wealthy property owners and the poor people they employ to run their homes and raise their families.

You can understand more about the inspirational activists who created and sustain a movement of grassroots organising in the form of the Treatment Action Campaign, Equal Education and The Social Justice Coalition.

You can access in depth case studies about Reclaim The City and the struggle for land justice which has now lead to leading to occupations in inner city Capetown led by homeless families and supporters including the principles, tactics, structures and strategies which define the organisers, litigators and activists of Ndifuna Ukwazi (Dare to Know).

And you can learn more about how the homeless Shack Dwellers of Durban, Abahlali BaseMdjondolo, have taken the initiative to seize and change their environments and the pace of politics despite assassinations with ‘occupy, resist, develop’ as their rallying call.

All of these activists are working to finish the job of Nelson Mandela’s freedom struggle to see the land, wealth and resources of South Africa at the service of its people.

This website is of course limited by our capacity and the bias inherent in our interpretation of the people and environments we experienced. We make no apology for that. This is what we seen and heard and felt. You may think differently, and if you don’t you’re probably missing the point. There are no absolute truths but contained in this site is a goldmine of lessons which we hope anyone struggling to build power for equality, rights and dignity finds helpful. This site should be viewed as stepping stone to link you to the people and organisations we met to learn more directly from them.

Our learning was only made possible by the openness and honesty of those many inspirational activists who shared their stories while operating in dangerous and challenging environments, some who appear on this site and some who do not. This site is a thank you to all of you who gave us a place to stay, opened up your homes, families, hearts and communities to tell us what you know so that we can capture it and pass it on. This site is only possible because of you and we hope it is in some small way testament to the way you change the world every day.