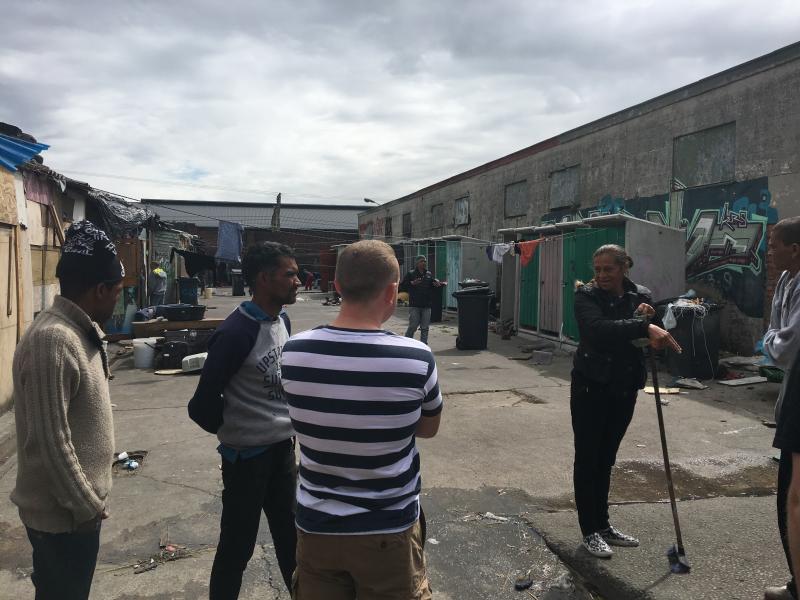 Today was spent with colleagues from Ndifuna Ukwazi, Tyrone and Disha, and the residents of Bromwell Street in the Woodstock area of the city. The area is gentrifying rapidly resulting in these residents, all 49 of them, having their homes sold out from under them. The oldest is ‘Auntie Brenda’. At 75 years of age she has lived in Bromwell Street all her life and is now being told that in a months time she will be evicted and homeless.

Speaking with Charnell, (the spokeswoman for the residents group) we learned that for months the residents have been fighting this eviction and more recently with the help of NU have bought time to attempt to force the city to rehouse them. When we enquired about the housing waiting list she explained that 400,000 people were on it. She has been waiting 12 years. There are no points like the NIHE system. They told us you just wait. We were told that there is widespread corruption, hence over a decade on the list!
Today the ‘city’, AKA the Government, had arranged for the residents to travel 30 minutes away by car to see a housing development called Belhar, built and ran by a private housing institution, Madulammho.  We were ready to go from 9am along with the residents.  The ‘city’ conveniently forgot to send the bus they were supposed to provide and left them waiting for over an hour before we drove them ourselves. On arrival at this new housing project residents were given a talk regarding the qualifying conditions for one of these homes.
First, there were different income brackets that determined whether or not you could rent a bachelor, 1 bed or 2 bed apartment. There were a whole host of other conditions – a police check, a credit check, a valid ID, months of payslips, bank statements, divorce papers… the list was endless and for the majority of the residents they were conditions they couldn’t meet.
Auntie Brenda for example is a pensioner who only receives 1,500R each month.  To even be considered for a studio ‘bachelor’ apartment you need to be earning at least 2,500R per month. So the question is what happens now?  As a community, these people want to be rehoused together, and rightly so. There is an overwhelming sense of comradery and it is easy to see they are all very much a family.
Also in Bromwell Street, Charnelle showed us a row of stables (yes stables that would house horses) that people had made homes from which had then been condemned by the government. There was no electric or running water and we met the women, men and children who had been living here for years. Some of the residents explained that governmental officials visited the sight with an abundance of promises but nothing changed. Again these people have been on a housing waiting list for decades.
In the afternoon we visited a general meeting of the South African Domestic Service and Allied Workers Union (SADSAWU). They had fought for the national min wage to be increased and had won, domestic workers would now earn 4500R per month as opposed to 2500R. They were celebrating a great victory and strategising for implementation. Myrtle and her comrades explained that Domestic Workers had no benefits such as compensation for work place injuries should accidents occur. They were working tirelessly to have a compensation act passed and we were let in on a few up and coming actions that might well upset the apple cart in the city. So watch this space.
Myrtle and her colleagues are no strangers to campaigns. Some had lived and fought through the Apartheid system. Their’s was one of the more successful campaigns we were fortunate enough to visit. Many of the domestic workers lived in employer’s back yards in tin huts. Myrtle campaigned hard and thanks to her and SADSAWU, some of them, for the first time, have their own home.
We drove them home for a visit and a walk about the project. Like Belhar, it is 30+ minutes away by car and the ladies who showed us their homes explained it cost 50R a day to get to and from work. Across the street was a fenced in high security government housing complex. The residents had their security removed.
But here, for the first time in 25 years, Hester had her own home, with a bedroom and a bathroom. Nelson Mandela had pride of place in the living room. What a day.