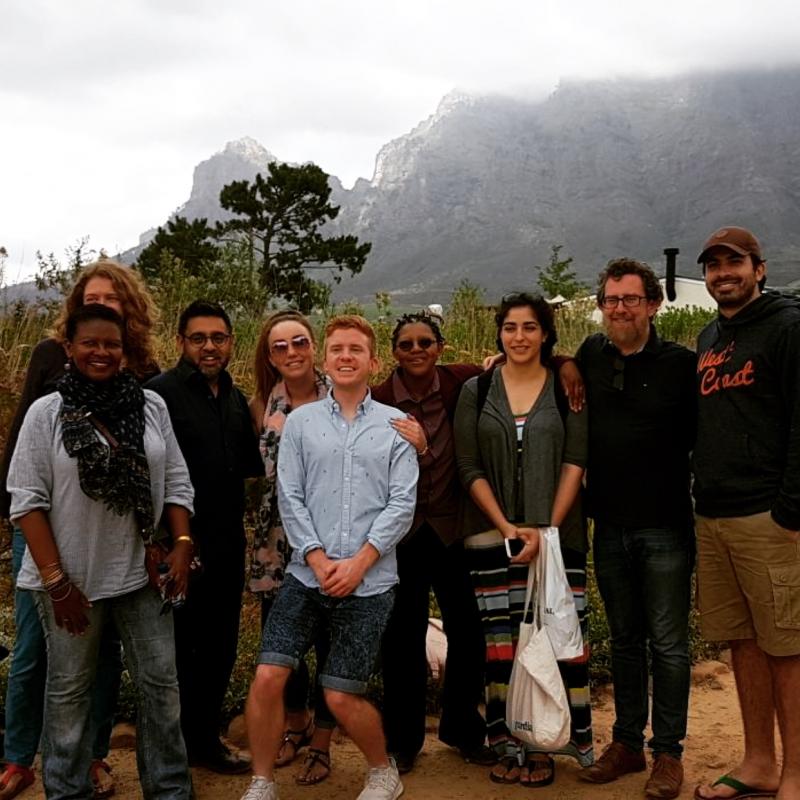 Having just spent one of the most thought provoking weeks of my life in Boschendal, undoubtedly the most picturesque place in Cape Town, I am feeling somewhat inspired and enthralled by the stories and the experiences of some (in my opinion) of the world’s most amazing activists.

Every activist there had a story (or ten) to tell. We all as human beings shared in each other’s struggles knowing fine well that whether it be London, Chicago, Johannesburg or Belfast, life for those whose human rights are being infringed upon is pretty grim and it was up to people like us who claim to be human rights activists to put ourselves at the disposal of people in the hope of bringing about systemic change.

Having met many people before like Phumi, who advocates on behalf of LGBT people in her setting in Johannesburg, or Charlene Carruthers, the National Director of Black Youth Project (BYP) 100 in Chicago, it was great to be able to catch up on their always learning journeys since we last seen them in Wicklow. However, this time round there were new faces, representing new or maybe not-so-new struggles needing to be addressed.

For example, I had the pleasure and was humbled to meet and spend time with Yashar Kassar, a Syrian Humanitarian Crisis activist who has been campaigning and fundraising for the Syrian people for many years. Having spent the majority of his life growing up in war-torn Syria, he openly and honestly told me his story. He explained how his father was a major influence in his life as an activist voluntarily working in the poorer communities in Syria, taking Yashar with him to distribute food and essential items. He talked about his work with the Rohingya, millions of people facing a humanitarian crisis on the Bangladeshi border, which moved him to tears. Their statelessness and Yashar’s activism is a struggle for humanity, one which he will continue to fight…

I also shared in some learning from Dami Madikane, a Nigerian living in England who operates the ‘Let Us Learn Project’ for young people in London. They provide a holistic approach to support children living in some of the most socially and economically deprived areas of London to improve their standard of living. Learning from them and discussing ways in which we can all make change on a scale that mattered raised many questions about our own work back in Belfast and what more we could be doing to change things.

We attended an ‘Activism That Works’ discussion which was attended by Archbishop Desmond Tutu and his wife (who received a Global Citizens Award) I was amazed by the panel contribution of extraordinary women like Phumeza Mlungwana, former General Secretary of Social Justice Coalition, South Africa and Opal Tometi, co-founder of #BlackLivesMatter. It was interesting to be a fly on the wall sampling mixed reaction of the audience when it came to discussing the current situation in South Africa, how it relates to the context here in the North of Ireland and opinions on what could be done about it. As Bernadette Mc Aliskey rightly stated during this discussion “what was left out of all these peace processes was the democratisation of wealth” the root cause of inequality yet no one seems to be addressing it on a scale that is needed.

We were lucky enough to meet with some of the previous activists from Social Justice Coalition, Equal Education and Ndfuna Ukwazi to hear more about their current campaigns and also attended an ‘Arrest Zuma’ demonstration, a mock trial of the corrupt South African President and former head of Umkhonto we Sizwe’s intelligence services We were also thereto highlight the lack of and complete deterioration of the basic transport that is literally killing people on their way to and from work!

We held a minutes silence for a worker coming from Khayelitsha, who died as a result of electrocution because there was no room on the train and like so many others he climbed onto the roof in order to make it to work and this unfortunate day resulted in his death! People dying on the way to work in a city that doesn’t let them live there and calling for the government to take simple actions to provide them with safe trains and better operational transport.

Both myself and Seán gave our own presentation. I spoke about how I became a ‘human rights activist’ and what that looked like for me, something up until then I hadn’t really reflected upon or thought much about… I suppose we don’t get time in our everyday busy lives to talk about who we were where we came from and what made us? For me it started in 2009 when I faced eviction with a 3 day old baby from one of the Seven Towers, a high rise housing complex in North Belfast.  In the face of imminent homelessness I got involved with what is now known as ‘The Equality Can’t Wait Campaign’.  Whilst my own housing situation was resolved this incident only awakened me to the much larger scale of housing inequality and the need for ongoing pressure to make change happen.

Alongside the ‘formal’ learning there was an abundance more to be had of ‘real work’ to be done over dinners, around campfires, and on tours which expanded our knowledge. As we all parted it was evidently clear that the ideas and solutions to the big questions of our world  were nowhere near finalised and that the most important part would be learning and sharing long into the future.