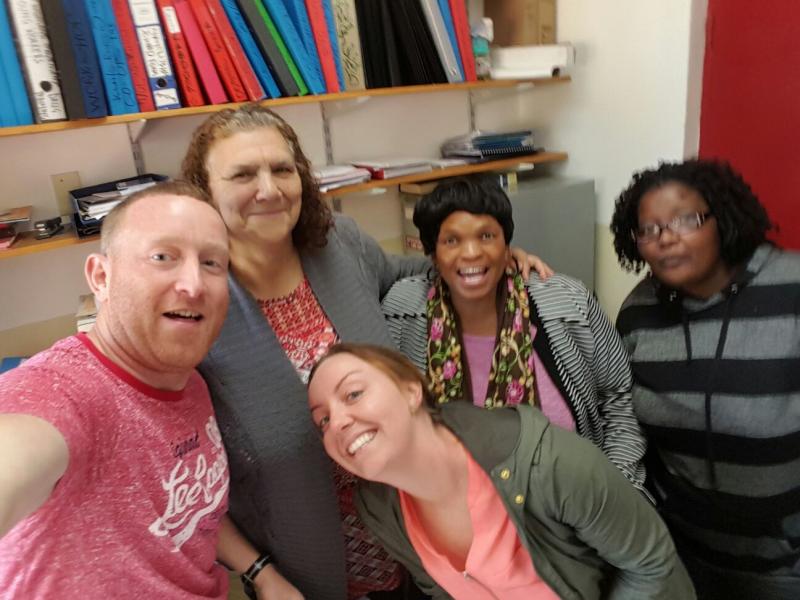 What a way to begin a Wednesday morning with three of the most inspirational women i have ever came across in my 28 years of being-Myrtle, Cindy and Gloria. These are three of the ladies who work for SADSAWU the Domestic Workers Union we visited on Saturday. Myrtle (the General secretary) was some character and as she spoke I couldn’t help but think to myself I am sitting in front of another Inez and believe me I didn’t think there could be two!

Myrtle herself was a domestic worker and had had been involved in the Domestic Workers Union for decades,  she talked us through some of the harrowing issues they face and also some of the glorious victories they have won.
Myrtle like 99% of the domestic workers who worked in homes as maids and nannies were not allowed to have families of their own. If and when they had a baby he/she was sent to live with relatives whilst the domestic workers raised their employers children. For Myrtle this meant sending her daughter to live in the township with her mother.  She explained that for ten years this was how life was and when her daughter was eventually able to live with her she struggled to call her ‘mum’ and would refer to her by name.  You could tell simply in how she told this story just how difficult this was for her as a mother.
Gloria told us how she became an organiser at SADSAWU. Again, like Myrtle, she was a domestic worker in someone’s home.  She was verbally harassed  by her employer on a daily basis and called unimaginable derogatory names. Gloria told us she had made numerous complaints to the police (which the employer was able to buy his way out of) however, after she was spat on she finally left and approached S.A.D.S.A.W.U for help.
It resulted in the employer being prosecuted, firstly with some form of probation with the judge enforcing that as a punishment he must work with black women as well as paying Gloria R50 000 in compensation.  After violating his probation he was sentenced to a jail sentence. As dignified as she was Gloria also explained it wasn’t about the compensation she merely wanted justice not only for herself, however, as an example for other domestic workers.  She joined S.A.D.S.A.W.U as an organiser after this.
The energy between the three was so uplifting and there was a right laugh at some of the stories Myrtle was telling. From chaining themselves to the gates of Parliament to locking Ministers in rooms and removing the phone line were all just ‘strategies’ she says in order to give domestic workers the basic rights they need! To date they have obtained a minimum wage for the domestic worker and next week are taking their right for compensation back to the government.
Whilst there Cindy gave us a tour of community house, we walked though years of activist history and met some of the other organisations housed there who were, just like S.A.D.S.A.W.U, working hard fighting injustices for the ordinary hard working people of South Africa.
From here we had a presentation at the NU offices regarding our work and the different campaigns we are involved in as well as an update from the organisers on the Tafelberg Site in Salt River (previously been sold to a private developer which they managed to tackle and gain back as part of the ‘Reclaim the City’ campaign)
Later that evening we attended a talk in AIDC (Alternative Information and Development Centre) by Don Pinnock the author of ‘Gang Town’.  He was speaking about some of his findings regarding gangs in Cape Town and gangland culture in the townships.  There was also pupils from John Ramsey High School in Bishop Lavis some of whom were involved with gangs others of whom lost friends and family members at the hands of gangs.
Some of the facts and figures presented by Don were shocking. Whilst on average 6 people a day are murdered, that equates to 6.4% of every 100,000 (no different to the likes of London and New York) Don stated on ‘the other side of Cape Town’ aka the townships such as Bishops Lavis, Langa, Nygana and Khayelitsha this figure rises to 200 people per 100,000.  Yet even more shocking was that gang murders accumulate to 11% with the majority of murders being a direct result of domestic violence. After talking with some of the activists we met it seems to be a culture of domestic violence and the need for more education around it. Again something which Myrtle had mentioned is on her agenda!!
We finished the day with a brief meeting with Martin O’ Brien discussing our jam packed day and where do we all go from here….