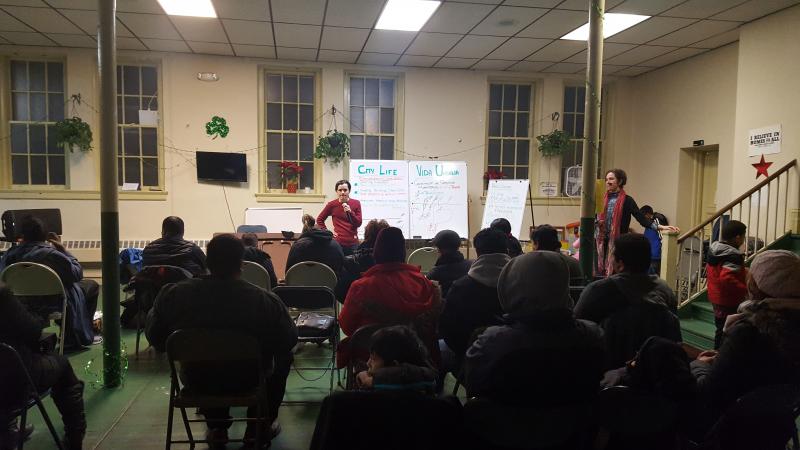 Vida Urbana and signing off from USA

I spent my last night in east Boston with 40 odd families facing various eviction threats – mostly low income Latino immigrants working hard to service the city in various ways. We were convened in a church basement by Andreas and Steve of Vida Urbana (City Life).

I got there early to interview Steve. He gave me some background before the meeting took place entirely in Spanish. Luckily real time translations were provided by headset for people like me who struggle to understand. Mi llamo Seán. No habla Espanol, los sientos, was the best I could muster.
The meeting was a powerful mix of emotion as people told their stories about gentrification, ruthless landlords using dirty eviction tricks and homeowners facing homelessness due to foreclosure and ‘market forces’. But, where market forces meet organised residents it’s clear the market and its forces can be forced to do unexpected things.
Steve explained the dual approach to eviction defence earlier; the sword and the shield. On the one hand a team of activists including volunteer lawyers were at the back of the church to deal with individuals on a case by case basis, writing public letters and providing nifty tips and tricks to drag out court and costs to landlords. On the other hand public direct actions were planned to disrupt business as usual and create pressure in favour of families. It reminded me a bit of our own approach on housing issues. In the foreground, public accountability. In the background, correspondence ever cognisant of policy.
Andreas cut his teeth with the Dreamers – a nationwide campaign by the US born children of, what Trump calls ‘illegals’, to ensure the rights of what Andreas calls parents.
Andreas was a magician organising the room, listening to the heartbreaking stories of families and connecting them to the right support whilst sharing the learning and tying it all up into the next action – a piece of street theatre which has not yet played out on an unsuspecting landlord.
After the meeting I went to see Biggy from Lumix perform free style rap like a pro in a local bar. There I had a conversation with Boak who was meeting Madeline.
He has established an open source software non profit looking into the racist and misogynistic out workings of facial recognition software which is integrated into almost every big name in social networking on the internet. Give it a go – Google search ‘woman’ or ‘man’ and see what images come back.
Because the most widely promoted facial recognition technology is built by white males of a certain age it tends to be bias in what it sees as people. This leads to ‘false positives’ on police or immigration facial recognition technology when looking at people who aren’t white. It also has a very narrow view of what a man or woman is and indeed beauty – google search ‘beautiful man’ or ‘beautiful woman’ and largely what comes back is the fantasy of a well paid Silicon Valley techie.
As Boak explained, the industrial revolution happened over a period of about 150 years and society adapted at that pace over generations to get to where we are today – think of the damage done during the intervening period both environmentally and socially.
Yet, the tech revolution happened and continues to evolve in the blink of an eye and society has had no time to catch up. Thus the tech systems and software which are now integrated into every aspect of life are deeply culturally skewed primed as they are with a male, white, western set of values. His project aims to start tackling that dilemma.
Me, him and Madeline went back to his house for a beer where he showed me his grandmothers papers from when she and his grandfather escaped nazi Germany before explaining his views on what he called ‘war crimes’ committed by the state of Israel.
A fascinating end to a fascinating day on a fascinating voyage of discovery. That’s me signing off and handing over to our South Africa Department. Over to you Marisa.