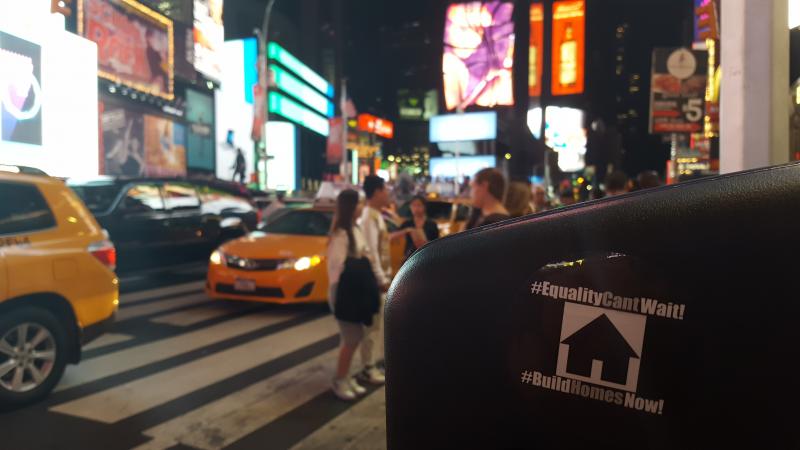 Touch down. Hi from across the Atlantic.

Made it! New York city. USA.

There have been a million blogs about the place so I’ll not bother about the tourist attractions. But it’s a truly amazing city. From what I can see, it has everything in abundance that the nearly 9 million inhabitants could ever want or need to live full and happy lives – world class health facilities, universities and other centres of learning and excellence, millions of jobs and billions of dollars, state of the art architecture, engineering and infrastructure, entertainment in abundance and a massive pool of ethnically and culturally diverse human potential.

But, as me and my new mates on the shared ride from the airport noticed as we wound through the very different neighbourhoods on the way in, inequality is rife. There are struggles for dignity and power going on everywhere. Same as home but on a much greater scale.

Marisa hasn’t arrived yet but she has nothing to fear as I’ve totally got the hang of things. I didn’t look one bit like a tourist when I tried unsuccessfully to swipe myself OUT of the uncooperative subway EXIT turnstiles for ten minutes on my first subway experience. A helpful ‘just walk through buddy’ from a fellow New Yorker and I was on my way again! Lesson learned.

We are here to learn from activists who are challenging inequalities in this city, state and across the US. They are organising people who are shut out and not benefiting from the overwhelming wealth and resources available, which many of them work for hours on end to create.

We have the privilege of being facilitated by great people and organisations like the National Domestic Workers Alliance who are, amongst other things, organising domestic workers, working in terrible conditions, yet using human rights tools to create meaningful change for themselves and others. We will meet activists with BUILD, East Brooklyn Congregations and Jersey City Together, including families suffering poor or non existent housing provision but successfully campaigning for thousands of affordable homes. We’re going to share what we know about power and change, particularly the Equality Can’t Wait campaign for and end to religious inequality in housing provision in Belfast. Hopefully we build more than just research. With any luck we can build relationships that progress our different struggles for equality, dignity, and systemic change.