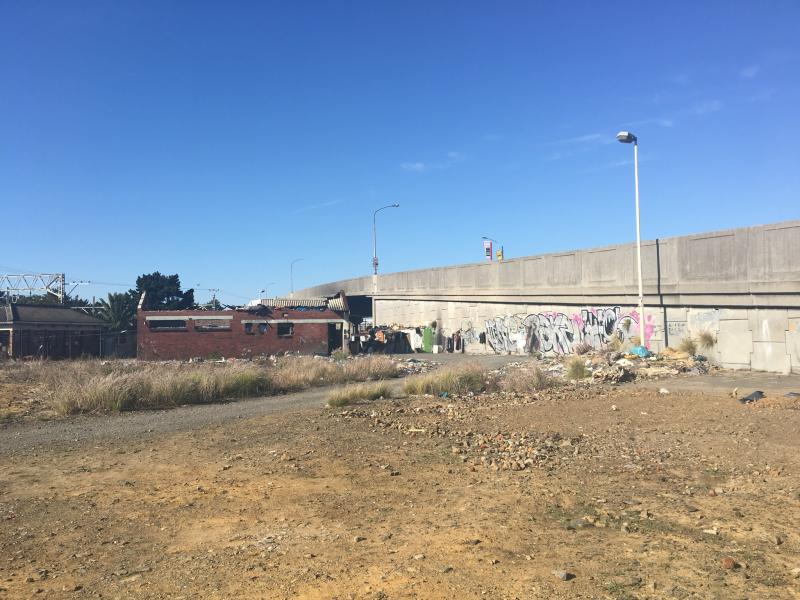 First thing was a follow up meeting with our friend Dustin at the Social Justice Coalition.  After a quick rant sorry – chat about both our current political situations (and coming up with 101 ways to solve the crises in the North and Cape Town) Dustin explained some more of the work the SJC had been doing.

When we were last here in October Dustin explained the sanitation crisis and what SJC had been doing in order to help provide the very basics of sanitation to the people of Khayelitsha and other townships.  Dustin explained that sanitation was always a representative of something bigger, it was about challenging the government on the informalities aound this ‘temporary housing’ status and the informal settlement upgrading issues.

He also explained more around the court case they have taken on the R100,000,000 redevelopment of Muizenberg police station. The background to this victory started in 2012 when the SJC had called for a commission of inquiry into policing in Khayelitsha – which was finally heard publically in 2014.  Dustin admits it was positive in terms the recommendations resulting from the case however, again like anything the government wants to change it took months for these to be implemented.  One of the main issues that wasn’t addressed in this hearing however, was policing resources.  After an investigation, the SJC discovered that policing resources are still allocated the way they were during the apartheid era meaning that areas like Muizenberg (a predominantly white middle class area with a relatively low crime rate) being given these extra resources and places like Khayelitsha where there is firstly a much higher population and secondly a significantly higher crime rate having very little resources. The redevelopment has been halted for now and the struggle continues…..

Next it was up a flight of stairs to meet Daniel from Equal Education Law Centre (who are a partner organisation to Equal Education) for a real quick meeting before I left for Salt River. Daniel explained that they assisted and provided legal support for the broader Equal Education campaigns. At any given time EE Law Centre have 60-70 cases ranging from supporting pregnant learners who have been expelled from school (simply because they are pregnant) to suing the government on behalf of parents whose children have died due to unsafe school infrastructure. Alongside this EE Law Centre assist in all cases where people are struggling to access education, they operate throughout Cape Town and not just within the Western Cape.  Daniel had a deadline for a very pressing case so from here it was onto Salt River to meet with Housing Assembly.

As an organisation Housing Assembly was formed in 2009 to address housing inequality and access ‘decent housing for all’ across South Africa.  To date they work within and advocate for over twenty different communities in the Western Cape.  I met with Bevin, Amanda, Carmelita an Thembelam (all volunteers) to discuss some of their work.  Amanda explained they work with communities living in all kinds of housing including informal settlements, temporary housing, RDP housing and temporary relocation areas. Bevin stated that housing is a systemic issue which he 100% believes is interlinked to the crisis of capitalism and the neo-liberalism.  He believes in South Africa housing is no longer a social service for people it has become a comadity and i am afraid i agree with him!

Like PPR Housing Assembly organise people around human rights issues and Carmelita rightly declared “change for the people needs to come from the people, it is a grassroots thing”.  Like us in the Equality Can’t Wait campaign they hold public meetings, go door to door surveying, hold focus groups and even do letter writing as a way to mobilise people and communities.   After an exchange of email address, literature and a few photos it was onto Bromwell Street to see Charnelle.

We fitted in a quick lunch and girly gossip before we set of to see who was left in terms of the residents in Bromwell Street, she tells me Auntie Brenda (who has resided in the same house in Bromwell Street for over 80 years) has been rehoused.  Graham and is family have moved onto the Cape Flats (which he and his children hate).  For Charnelle and her family the struggle continues, she is to await the hearing of the judges recusal before taking her next instructions from NU Lawyers.

Whilst we where there she brought me down to see where her cousin and a few dozen others had set up home.  It was a stone throw from Bromwell street next to the railway line.  They had set up ‘wendys’ as they are called, shacks – makeshift homes.  There is no electricity, no running water and no toilets. One lady who was attempting to sweep and clean the front of her ‘wendy’ had a Liverpool FC poster on her door and pointing out across the waste land littered with broken glass and rubbish jokingly shouted “this is Anfield, you must come back next time we will have the grass on the pitch”.   Like all the other residents I have met wether it be in Khayelitsha, Cissie Gool House or Sea Point they always seem to make the best of an undoubtedly horrendous situation and their spirits never seem to dampen…. I wish i could bottle their determination and bring it home!

Last but by no means least it was onto Sea Point to meet the residents and occupiers of the Helen Bowden Nurses Home in Tafelberg.  Face one of the organisers from NU and Elizabeth (an occupier) held a very open and frank discussion informing the people of the planned forward steps for the occupation.  They also had a guest speaker from Johannesburg who had organised countless occupations over several years to up the morale of the tired and weary residents.

I managed a diner with another fellow fellow Brad Brockman who was in his hometown for a bit before heading back to NYC to finish his fellowship before retiring to bed for a 5am start on my last day of activism…. Why 5am I hear you ask… Well I have been sworn to secrecy until tomorrow I’m not allowed to give away the game plan!!