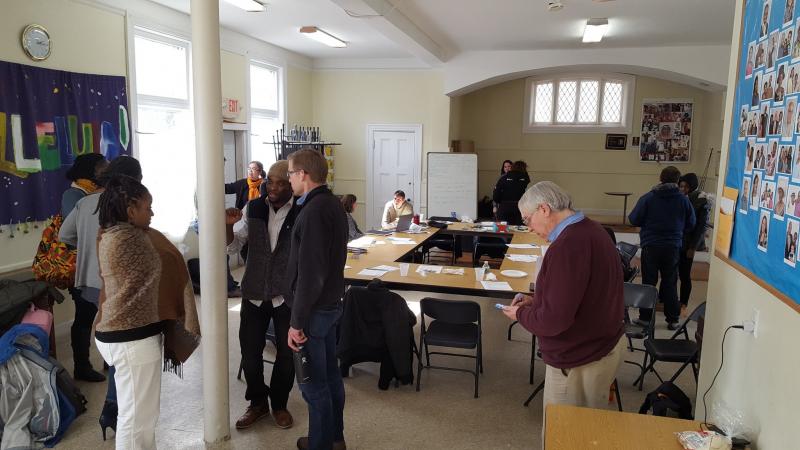 Thank’s O2 for connecting me to Boston.

About half an hour before I pulled up at the Back Bay station in Boston I realised I had no clue what I was doing, where I was going, how I would get there or who I would meet.

I had no access to email because O2, having sucked many dollars out of the Social Change Initiative over the course of this trip, refused to provide the service for which said dollars had been sucked – internet. I reported the theft to the Boston police force upon my arrival and checked for news reports of police brutality visited upon their CEO. None came.
So, let down by technology and multinational corporations, I called the only numbers I had; Lew and Madeline. Turns out that being disconnected from cyberspace was a god send.
Their numbers were provided to me by Michael, who lost four brothers growing up on the harsh streets of South Boston (Southy) where Whitey Bulger and the Irish Mafia one time ruled. Michael educated himself and later took many guns off the streets in one of his ventures working across race lines to tackle poverty, inequality and discrimination.
He now teaches and brings young people from North Eastern University to Ireland every year. Bertie and Marisa took them on a tour of the New Lodge and Shankill last year. I’m now getting stuck into his book; All Souls. It is voted best book by poor black kids in Boston public schools every year. Speaks volumes.
Anyway, back to Lew and Madeline. I got to see Boston through the eyes of more people than I ever could have without these two. Not only that, but I got to live life in East Boston (Eastie) in Madeleine’s totally Zen attic space for a few days. It was just round the corner from the amazing Zumix where she works.
Zumix was set up in 1991 at the height of the gun crime frenzy which gripped Boston. Madeline and her friends started out with a few hundred dollars, a love of music and deep sense of social justice. They started Zumix to offer an outlet for young people to express their anger, fears, hopes and dreams through music. ‘A kid with a guitar in his hand doesn’t have a gun in it’, she explained.
Over 25 years later they have multiple staff and volunteers who have turned out generations of breathtaking talent now sharing their music, interests and analysis across the airwaves of the Zumix radio station.
Hold on a minute. I forgot about Lew.
Before I met Madeline I was in Dorchester, a short trip from my hostel in China Town via the subway. A staff member in South Street station interjected when I asked another staff member for directions. He asked me; ‘Do you know that neighbourhood?’ I replied; ‘Nope.’ To which he responded; ‘Well I don’t want to offend anyone but it ain’t a white neighbourhood my friend’… okay then!
I ignored the white man’s prejudice and made my way to St Mary’s Church in Cushing Avenue. Gathered there were activists from the organisations operating under the umbrella of the Massachusetts Communities Action Network – MCAN. The assembled activists were discussing the next steps in exciting campaigns such as the Fight for $15 minimum wage and Jobs Not Jail – developed in response to the large scale incarceration of poor people of colour, many of whom have mental health issues or were involved in minor drug offences.
I would later revisit Lew, who connected me to other activists across the city, to record his own fascinating story spanning the anti Vietnam war and civil rights movements to his current role as  Director/Organiser of MCAN.
Currently the attentions of MCAN affiliates were being diverted somewhat from the aforementioned campaigns to tackling police brutality on the streets and Donald Trump’s ambitions for immigrants.
Katurah explained a recent direct action she and other young people took at the State House in support of common sense criminal justice reform. Katurah and the rest donned orange jump suits worn by prisoners and occupied the State House to deliver failing report cards to Governor Baker. He got a F on progress on ending mandatory minimum sentences, addressing racial disparities, stopping youth criminalisation, reforming the bail system, increasing after prison programming and a serious red face when the action was covered by the media.
Later, when discussing tactics on how to tackle the forced deportation of immigrants, Danielle spoke powerfully of how she viewed the deportations in the same light as the forced separation of families which occurred during slavery.
MCAN want to make Boston a sanctuary city for immigrants by ensuring the police force and civil service do not cooperate with the dreaded federal force of Immigration, Customs, Enforcement – ICE.
Danielle explained how ICE had followed a man recently to school with his child. As he pulled up to drop his child off they swooped  to arrest him and left the screaming child in the car. They caught it all on camera and put it on YouTube to raise awareness Such activity is expected to escalate under the Trump regime. In response, MCAN are building rapid response teams to ‘put their bodies on the line’ to protect immigrants facing deportation.
Later, I chatted with Madeline and her partner Pedro about some of the things I had seen and heard over beautiful Brazilian food the got me.
It was hard to get to sleep that night. I couldn’t stop thinking about the daddy being forcefully separated from his kid by armed men at a school gate. I’ve been separated from my family for two weeks and it’s tough. He might never see his child again.