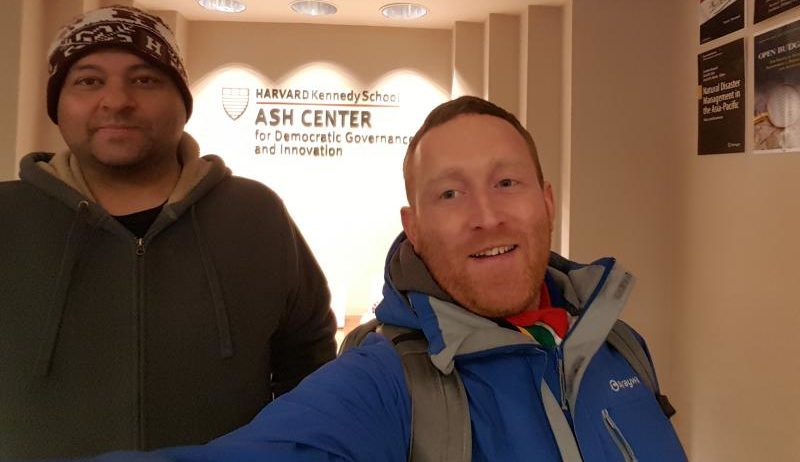 Pedro – from Juarez to Harvard

I had spent two days living in Madeline and Pedro’s home talking about what we were doing with the Social Change Initiative and PPR and finding out what he and Madeline and all their contacts were up to.

A few contacts fell through because of the snow and freeze. Pedro offered to take me on a tour of the city with his son, Eli, and his brother, Jesse. This tour of Boston blew me away as Pedro shared his story and experiences whilst weaving his car through beautiful frozen streets.

Pedro is Mexican, humble and inspiring. He lived as a homeless kid on the streets of Juarez (the most dangerous city on earth) before finding work in racist surroundings in northern Mexico – a place now called Texas by the descendants of dutch settlers who questioned what Pedro was doing in ‘their country’. Eventually he moved further north east to Massachusetts.

He laughed about the racist attitudes he and others experience – dark humour to tackle dark times. But he also spoke with a deep historical understanding of the colonial and post colonial contexts which continue to shape modern America and where things need to go next – My people have experienced hundreds of years of abuse but we have to say ‘that stops with me, right now’.

His long term philosophy is that the future is inevitably mestizo (mixed) and when everyone has ‘skin in the game’ these attitudes will increasingly be marginalised as families and communities weave – He doesn’t however think that the world will simply change for the better by the dilution of racial lines. Organising a better world will be hard work as Trump, Brexit and the rise of the right in Europe shows.

He took me to Harvard to the offices of his friend Marshall Ganz – the architect of a community organising methodology used by organisers across the world, including some of those I had already met.
Ganz and Pedro became friends during his attendance and graduation from Harvard. Yip, Harvard. He casually threw that gem into the conversation the day before while he worked at his jig saw puzzle.

He got an education on the streets and in college. He was accepted at Harvard on merit and offered a part scholarship which he supplemented by working construction and various other jobs. He is the only person from Mexico with a population of 132 million people to have done so who was not part of a privileged, super wealthy family.

National Governments and international corporations also dispatch their people to learn from Ganz at Harvard. Most are there cynically to develop strategies to combat community organising. About ten years ago Ganz hooked up with another Harvard grad, Barak Obama, to deliver the presidency of the United States of America.

As we walked around the halls of Harvard Pedro hooked me up with contacts and investigated scholarships I might explore to take Ganz’s courses! He brought me by Noam Chomksy’s patch at MIT.

I asked what he has been up to since graduating. He delivers seminars and tutorials to other would be organisers at Harvard. He developed and coordinated the strategy for the CasiNO campaign in East Boston. He helped get Obama elected in the first term by delivering Massachusetts then lending newly developed organisers and leaders to other swing states further west. Now he does research for Harvard which means he can have flexible time to hangout with the kids and wandering Irish activists. His love for Eli made me miss my kids – He said, ‘I don’t want to look back on life and regret not being part of my son’s life at this important time.’

I asked what happened from Obama to Trump and what difference it made for Mexicans. Pedro explained that more people were deported under Obama than all previous president’s combined.

For him though, organising during the 1st term was about the local change and the national consciousness – given the complex federal, state and municipal decision making systems it was possible to use the Obama campaign to build pockets of power for people on the margins whilst putting a black man in the Oval Office.

He felt that the difference between the first Obama campaign and the latest Clinton campaign was that organisers were facilitators of what people wanted to do at the local level. They listened, identified issues and supported people to act upon them. In this way they built localised organisations all over the country which had their own agency and power and were rooted in the ‘base’.

The Clinton campaign in contrast told people what to do and lost to a demagogue with a reality TV approach telling simple lies repeatedly to create hysteria. The republicans were united. The democrats were divided. Clinton did not harness what Sanders built. The rest is history.

Given the tumultuous political shifts and the ongoing widespread poverty and injustice in the USA I had plenty of questions for Pedro.

What happened to fuel Trumps victory? What do you think of the rise in racist attacks? What’s your experience of ICE? How did you get into Harvard? How do I get in? What’s happening with the cartels and the war on drugs? What’s going on with the mafia today? What’s happening with housing and homelessness. What works? What doesn’t? What are you active on at the minute?

He happily answered one after the other for about five hours as we travelled around Boston’s many universities through the streets and neighbourhoods I had heard of from other activists. He brought me to the best burrito place in the city en route to public housing projects in south Boston which were in surprisingly good order due to decent campaigns by tenants rights groups.

Thanks to the wonders of technology I have added Pedro’s accounts to our expanding audio archive.
I was moved by some of his answer when I asked him about he is at currently. He meets every week with organised family and friends, largely from the Latino community in East Boston, to discuss ongoing issues which they can act upon. Some of the organisations and structures built during the 1st Obama campaign are still very active in their own fields.

The most important part of organising for Pedro were the deep bonds cultivated between friends, family and neighbours during these meetings as they break bread together. These strong relationships mean that people love and care enough to act in defence of their neighbours when they are under threat of any kind.
It was time to pick up Eli’s mum from work on the way back to east Boston. I was heading to meet Steve and Andreas of Vida Urbana (City Life) to hear how they use ‘the sword and the shield’ in eviction defence campaigning.