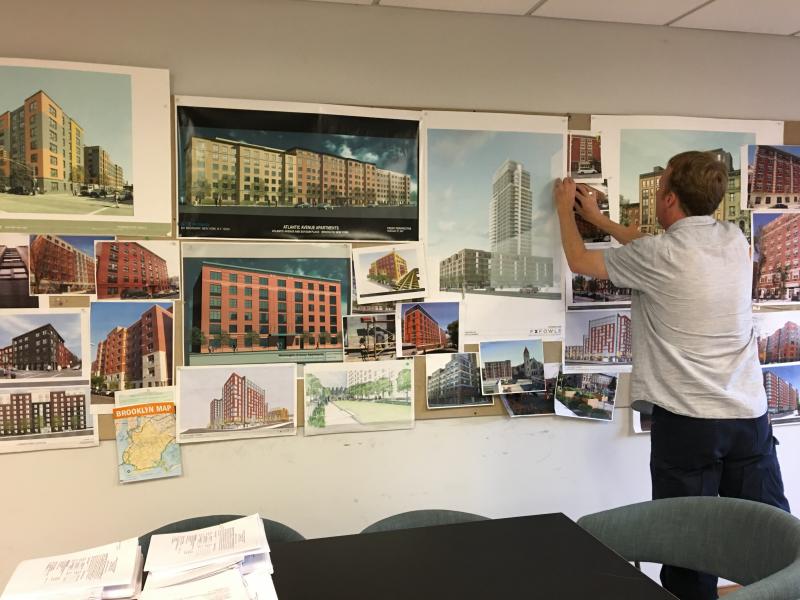 A new age of housing for NYC?…

Today Brady exited the country, leaving me to continue the fight for social change state side alone. Very emotional (on my part). I do believe we have become quite a team!

Anyway in the quest for equality there was no time for tears. I had two meetings today, the first was with Tim Cunningham, a PhD student examining transformative change with aparticular interest around housing within the North. We put the world to rights over coffee whilst discussing his recent published article “Human Rights, Conflict Transformation and Urban Planning System, Lessons for Northern Ireland”  and topics such as methods of participatory theory in terms of housing/homelessness campaigns and ideas on progressing PPR’s unique approach to tackling inequalities.
Later I had a meeting with Martin Dunn, an award winning community developer in the field of low income affordable housing. Martin was super busy, it was 6.30pm on a Friday night and he along with his team were still hard at work. I was grateful he was able to spare me a half hour as I gained a great insight into how he is helping to transform the face and notion of low income housing within the State of NewYork.
Martin previously worked for a community development NGO in Brooklyn which looked at youth and senior provision as well as low income and transitional housing. He explained how people with disabilities were kept in institutions and when the government shut these down people were then placed into segregated housing schemes and many even ended up homeless. Martin believed things should be and could be done differently and in 1999 established his company Dunn Development.
Martin wanted to provide integrated housing  for families, seniors, people with disabilities and low income and middle income families. Alongside this he wanted to have amenities and facilities such as day care and health centres attached to these developments. He showed me the sheer amount of work that goes into one of these applications/proposals to the government and explained the level of competition for these developments. However, to date Martin and his team have won each application and it is clear to see why.
I had discussed our housing crisis back home and the issue with available land Identified by the Equality Can’t Wait campaign. I explained the current situation with the Dunnes/Hillview site.  Martin explained how the Catholic Charities Group have provided many pieces of land on which he was able to develop alongside some government owned land. He also told a very interesting story about the nuns from the Sisters of St Joseph.  They had been very progressive in that area turning unused convents into homes for incarcerated/formerly incarcerated women and their children with the vision of assisting them into rejoining the community and having a better quality of life. I asked for a contact there. I do believe it would be worth talking to these Sisters and learning a thing or two!
Martin and his team showed me some of the building work just recently completed, he had explained that within the one apartment block there were families earning less than twenty thousand dollars a year living alongside families earning tens of thousands, disabled people and older people, all of whom share a commen area that hosts a play park, an exercise garden and a health centre. Martin is very passionate about this way of living and has concrete evidence that integrated housing can and does work within NYC.