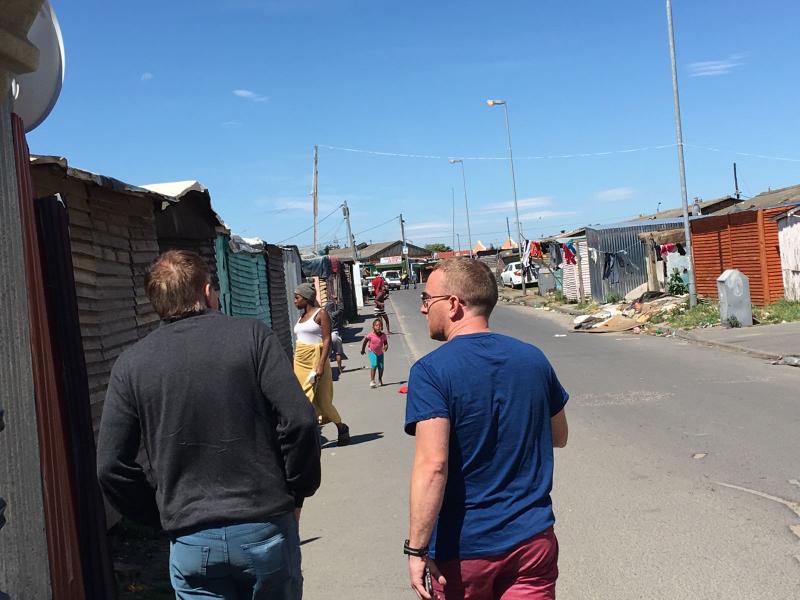 Today we had a tour of Langa, one of the many townships established under the Urban Area’s Act in 1921. This particular township was established in 1927 prior to the Apartheid era and was designated for black Africans.

It covers roughly a 1 square mile radius and houses almost 60 thousand people. Malcolm from the National Association of South African Housing Associations (NASHO), who clearly knows everything there is to know regarding the housing crisis in SA, very kindly explained the set up.
As you drive through Langa there is a whole range of housing i.e. flats, bricked houses, informal shacks, wooden and tin huts and all sorts. Malcolm explained how these different forms of housing were established throughout the decades. At different stages the ruling Government intervened and invested (using these terms very loosely now) in some form of housing within the area.
For example during the Apartheid era the flats that we seen were built and used as hostels to house thousands of mainly male migrant workers. Now they are filled with people and falling apart. Some of the brick free standing houses went up around the same time on a rental basis. At the end of Apartheid, ownership was given to the residents but maintenance and repairs and infrastructure was left as noones responsibility and so they deteriorated rapidly.
The predominant form of housing are the haphazardly constructed shacks that the majority of people live in. They are overcrowded on a scale we have never seen and have no running water or any toilets or wash facilities.
The state now put in Porta-loo’s and, going by the smell, maintenance didn’t happen. Dotted about the place were shops, hairdressers, tailors, even a bar/social club. Tens of thousands of people left abondoned were basically self sustaining themselves. Due to the lack of public transport and the costs of any other mode of transport to the city, I suppose they had no other choice than to create a village from nothing.
Feeling somewhat deflated after witnessing what some people were forced to call home, we attended a lecture by Rob Peterson, who himself was exiled during the Apartheid era for his role in trade union activism.
It was an activist training course running for six months regarding the evolution of property and how it rules the world. It was well attended by participants from NU, Equal Education and the Social Justice Coalition. Some travelled from Kayelitshya camp to take part every week. Although we only missed the previous 23 lectures it was an interesting insight into the real meaning of wealth and power and exactly how the 2008 financial sector crisis occurred in terms of housing and sub prime mortgages.
Tomorrow we we head to Kayelitshya to see how the the money games played by millionaires in Wall Street work out for the poor in the real world.