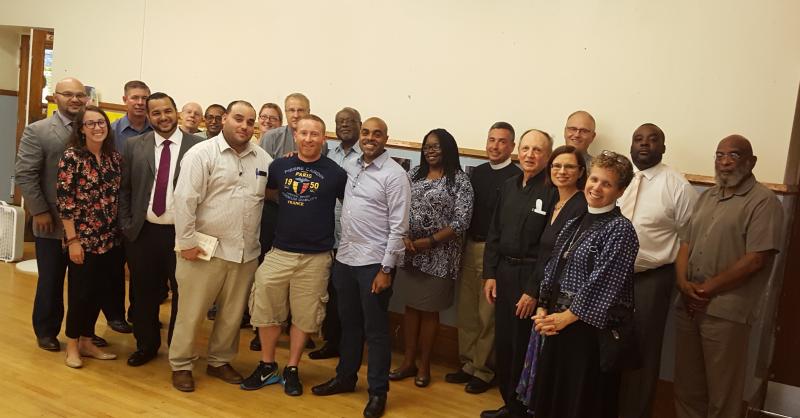 It’ll take more than a blog to explain it, but Jersey City Together are some outfit. Organised with professional organisers from the Industrial Areas Foundation they have come together from all faiths in Jersey City to combat the decline in jobs and affordable housing impacting the Black, Latino, Indian, Jewish and other communities who can’t afford the luxury condos built downtown by Goldmann Sacchs and Co!

The official hashtag of Jersey City #MakeItYours is an appeal to wealthy Manhattan finance people to move there and take over. And the working class families living there already are being pushed out further and further losing homes and opportunities as they go. Wealthy developers are buying up the land all over for gentrification, building luxury apartments and all the trendy fads that go with it.

So, against that tide, the work of Jersey City Together is all the more impressive. They have united the faith leaders, who I met, and in April launched with almost 1000 people and the mayor, schools commissioner and other ‘duty breakers’ in the room from all faiths and none putting pressure on the Mayor (Check out the video below to see how comfortable he was with the emergence of this new power dynamic).

The usual run of things is that the political machines run the politics of places, community, church etc. These guys have flipped this on its head by burying their individual differences in favour of collective action for the common good of all of their congregations.

Pastor said… If my house is on fire I don’t care what religioun or race the fireman is when he comes to put it out, so folks we have to ask ourselves, is our house on fire and if so, are we coming together to put it out’

And now they are developing local leaders through each faith group built from their communities. They are Preparing for the next stage in the campaigns for decent homes, safer streets, better opportunities for young and old, and consolidating the new power they have built in the city.