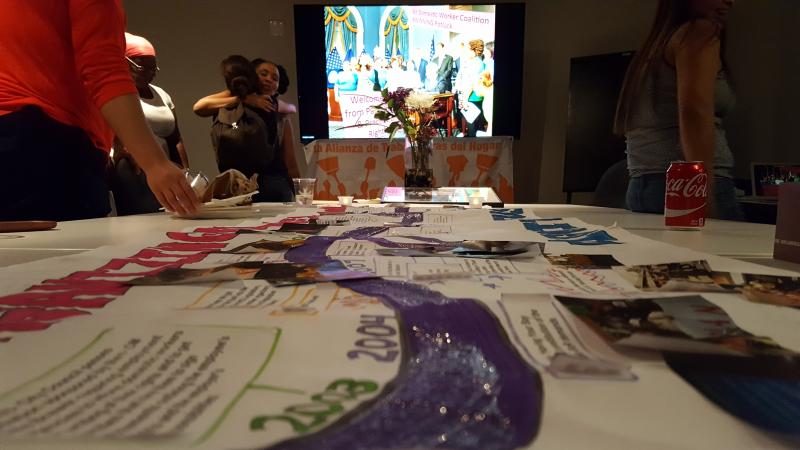 What an introduction to organising in the US!

Last night I was in the New York District Council of Carpenters building for a fantastic opening insight into activism in the city.

The community gathering of domestic workers and organisers was facilitated by Irene Jor of the National Domestic Workers Alliance (who has been amazing in helping a wandering PPR activist). It was a celebration of the introduction into NYC law of the Domestic Workers Bill of Rights. I was welcomed with open arms, fed and watered with pizza and drinks and given a precious insight into the personal struggles and collective victories of domestic workers in NYC.

To say that domestic workers are facing injustice would be an understatement and a half. The women I spoke to had experienced everything including human trafficking, displacement from their families, violence and working conditions akin to slavery  – all under wealthy employers who pay more for their shoes than they do on people’s annual wages.

In the face of injustice they have organised themselves and their fellow nannies, babysitters, housekeepers and care givers to stand up to employers, challenge and change conditions, claim back wages and restore people’s freedom. They have also changed the laws which failed to protect their rights and are on a mission to see the law implemented for the benefit of their communities. So, it was a time for both celebrating the Bill and planning how the rights holders can now influence the purse strings of the duty bearers in NYC.

I got to meet and share stories with organisers and activists from Damayan (Organising Filipino low wage workers to combat labour trafficking, promote human rights and workers rights, and develop social justice leaders) the Carroll Gardens Association (Organising for community affordable housing and community based economic development in southwest Brooklyn) and We Won’t Wait (Elevating the voices of women of colour, low income and poor women, immigrant women and young women to call for a policy agenda that promotes economic security and communities that thrive). It was inspiring.

And I was asked to say a bit about how PPR organise with families who are shut out of decision making about their lives. I hope I did us justice through the jetlag!

Stories, tactics, cards, numbers, emails were all shared. It’s only the start of learning from each other.