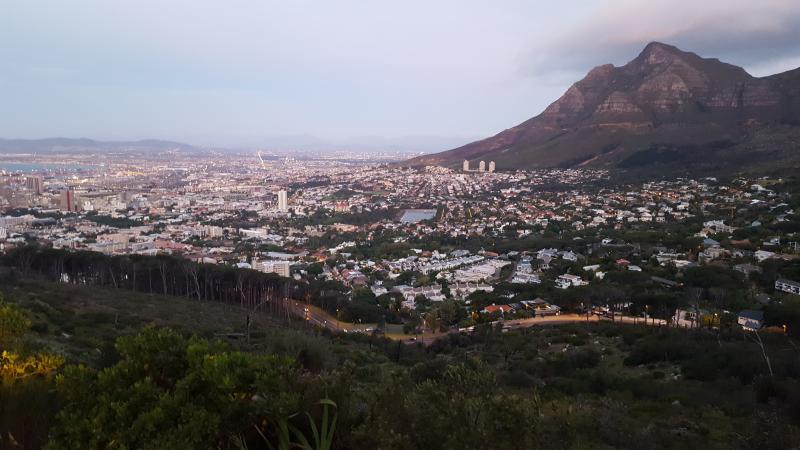 So, we arrived in Capetown last night after an epic 28 hour journey. For libel purposes we won’t mention the hassle a certain airline gave us by losing our bags somewhere over the Sahara desert. No, British Airways wouldn’t like that. Oops. Onwards.

There is a lot going on and we will meet with many people over the next few days who are in the heart of campaigns for health, housing, education and more.

Today we met for the first time with the wonderful Hopolang and Gavin from Ndifuna Ukwazi. We were warmly welcomed in, met with staff and even given office space for the duration of our stay. If it weren’t for the fact that we have abandoned our families and the small matter of unaddressed religious inequality in social housing and a few other loose ends, we could well have tendered resignations this morning and been part of the brilliant Reclaim The City campaign by this afternoon.

After a tour of the office and a comprehensive run down on the operation from Hopolang we drove through the beautiful city streets to an activist education discussion, led by Gavin and attended by many and varied Capetonian activists.

The Reclaim the City campaign, which is supported by Ndifuna Ukwazi, is finding available land in the city for social housing for the huge populations of mostly black and coloured families who have been driven out by gentrification or moved to government social housing forty miles away from the city and it’s facilities.

Many of these families spend half of their day and income commuting to a city which, in housing terms, has remained largely unchanged on the lines of class and race which divided it under apartheid. The progressive language, policies and governance structures, which came into effect post-apartheid, have not tackled spacial segregation. In some cases it is worse and getting much worse as unchecked land speculation and property purchasing escalates. One high profile government decision-maker recently confronted by this reality said ‘we cannot intervene in market forces’. But the activists we met beg to differ, and are showing the way by identifying the land and the laws and campaigning to ensure government resources are used for social change for the people.

More power to them! Last year Capetown had the honour of being the No2 city in the world for people with over $10m buying second homes (the Hamptons held on to the No1 slot). What this means in real life is that the most expensive homes flip and sell between buyers, who rarely set foot there, for prices of up to 290000000 Rand, whilst thousands of homeless families build houses from tin on the motorways on the way in from the airport.  Private developers flipping land for profit without any community benefit is, of course, a global trend and one we witnessed in New York as well as North Belfast.

This phenomenen here though, of failing to translate laws and words into meaningful change, was a contributing factor to the major hit the ANC took in the recent elections. It is an interesting moment in South Africa’s story. We got a sense from people today that those in power, on the crest of the ‘post apartheid’ wave for the last 20 years, need to now seriously check themselves, their power and their purpose. Those who kept them in power are demanding much more and fed up with ‘market forces’ excuses.

It is sad to see how the positivity and transformative potential of something as massive as the South African freedom struggle and the end of apartheid could end up so far from the ideal so many years later. Yet, it is inspiring to see how activists in the tightest of spaces are reacting, not with bitterness and rhetoric, but by organising effectively to challenge and change power and shaping the very ground beneath their feet.

And that was only day one…