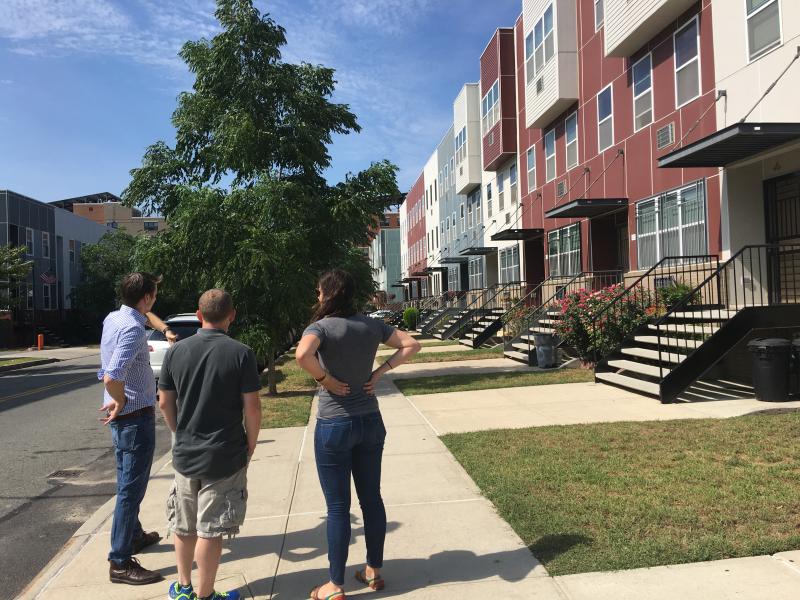 Wow what a day…. Met with Frank and a few of his colleagues today to look at the housing situation in East New York and Jersey City. Frank himself does work for Jersey City Together, East Brooklyn Congregations and a host of other campaigns and is no stranger to PPR and the work that we do… In fact it’s hard to believe it has been a whole 7 years from I last seen him….

We started the day in East New York an area with high social deprivation and where housing issues are amongst the worst in the State. Frank explained how Nehemiah had built over 4000 homes many of them being in that area. The story goes a little something like this…A mass of clergy people and residents from all secular corners stood together to politely encourage the Mayor of the town to invest money into this area.. They themselves had raised millions and were asking for a subsidy from the state, to use public and private land that had been lying vacant for years and put affordable homes for families many of whom who were living in high rise accommodation (is any of this sounding familiar yet??…)
Frank explained how families were able to afford mortgages through this scheme, and no one lost their homes in the financial crisis. They were given affordable loans and if stayed in the property for twenty years had a percentage of this loan eradicated, a scheme from where we were looked to be working well!  From there we went to Jersey City a stones throw from Manhattan and upon driving into it you would swear blind you were still in Manhattan, Goldman Sacchs have built numerous expensive apartment blocks and business of the back of the taxes of the black and Latino families who can not get housed there. It is essentially a mini Manhattan. However, drive a few blocks away to areas like Lafayette and MLK Avenue and immediately you see the stark contrast. Again Frank explained the campaign to build  affordable homes in and around the area but you could not help but notice the poverty and destitution of the place, derelict buildings, vacant land which could well be used for housing however, due to contamination being dumped it is uninhabitable. Good news is though that Frank and his team of activists are addressing such issues and putting plans in place to change this….
Whilst here we got talking to folks on the street regarding issues in the area, apparently it has a high rate of gun crime and issues with policing and safety.  In fact we were told that just days previous someone was shot dead and dumped at the sides of a railway, that is the harsh reality of what is occurring on almost a weekly basis! Talking to both young and old people there and asking what they would like to see in their area it was the same issues they were raising, regeneration of the area I.e. Building homes and investing in the likes of after schools and youth programmes…..
Upon leaving the city Frank very kindly took us into Liberty City on the fringe of Jersey City which by the way was not an area of deprivation by any stretch of the imagination in fact it is home to one of the worlds most expensive Golf courses….only costs half a million pound for a years membership… Bargain!!
Driving back to Manhattan I couldn’t help but realise the similarities in the needs and issues of the people I spoke with/places I had seen earlier in the day, minus the American accents and 30 degree heat you could swear blind you were surveying people in North Belfast….