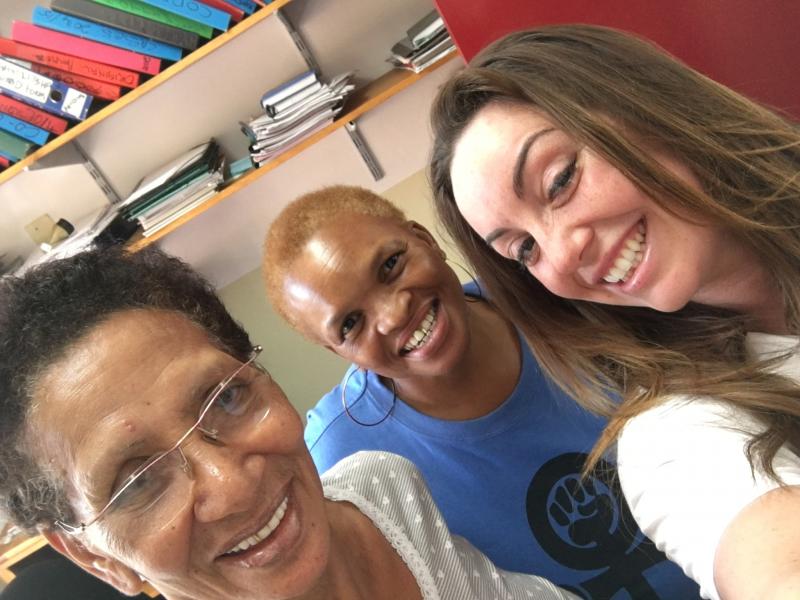 Cindy, Christine and the COSATU Crisis

I arrived at the offices of SADSAWU this morning, Cindy greeted me with the tightest hug imaginable and like the first time round I instantly felt at home. Cindy was joined by Christine a domestic worker who also volunteers at the office on her one day a week off. Myrtle had just left for a meeting in Hong Kong and Gloria would be joining them later.

Cindy gave me a run down on SADSAWU’s progress in the past six months. She explained that just this week past Myrtle met with the Department of Labour to negotiate for certain training for domestic workers. One example Cindy gave was that employers are wanting their employees to be able to drive, in order to do this workers need lessons and a license.  Myrtle was negotiating/planning how much money the Department of Labour could provide for this and how SADSAWU could facilitate it.  Cindy also took great pride in telling me that alongside this development ‘study circles’ as she described them have been established.  They are union members organising migrant workers and hope to make these groups into associations of SADSAWU. To date they have held a workshop to draw up a constitution and Cindy admits the hope for these associations is to create a chain of education which gets passed on.

Christine explained she has been a domestic worker for longer than she cared to remember working for the same employer for past 16 years! Whilst Cindy took phone calls (aka stopped allowing me distract from work) Christine told me about some of the exploitation she has been subjected too. Her employer expects her to complete unimaginable work in half a day (when in reality it would take an entireday) but Christine says her employer  is “too stingy” to pay her a full day’s wage. She also expected Christine to her clean dozens of windows around the house which is in the gardeners contract not hers.

When I asked how many more years does she expect to be a domestic worker (as back home she would be years into retirement age) she admitted she would be there until she could find and afford her own home. Until such a time she relies on her employer for a roof over her head. As tough as her job is and despite the daily challenges Christine tells me she merely stays calm, does not open her mouth and “gets on with it”.  Such a gracious woman.

Whilst I was there Cindy took a call from a domestic worker, Rachael, who had worked for her current employer for 22 years.  As a member of the union she was asking for advice. Rachael explained that her employer was leaving pieces of her jewellery in Rachael’s room to ‘trap her’ as Cindy explained (i.e. In terms of a reason to dismiss her).  Cindy advised Rachael on the best course of action in order to deal with the issue and although I could see how dismayed both Christine and Cindy were at how cruel employers can be neither of them seemed in the least bit shocked.

We then discussed the challenging times at the minute for COSATU as a union over coffee and donuts.  I was aware there was a split however, Cindy explained there was now a new federation which had been established named SASAWU.

Personally, Cindy doesn’t believe it will attract a lot of workers as their payment is 25R a month compared to SADSAWU’s annual fee of 70R, she stated “a new broom sweeps clean for a while, but eventually it breaks”….. food for thought eh?

Cindy admitted that Seán and myself (with our stories) gave them “the fire to keep going” when we last visited.  She hoped SADSAWU could reciprocate that to us and the Equality Can’t Wait campaign, and believe me when i say if there was ever a woman to give you any sort of encouragement it is 100% Cindy. I practically skipped to the NU offices after that meeting!