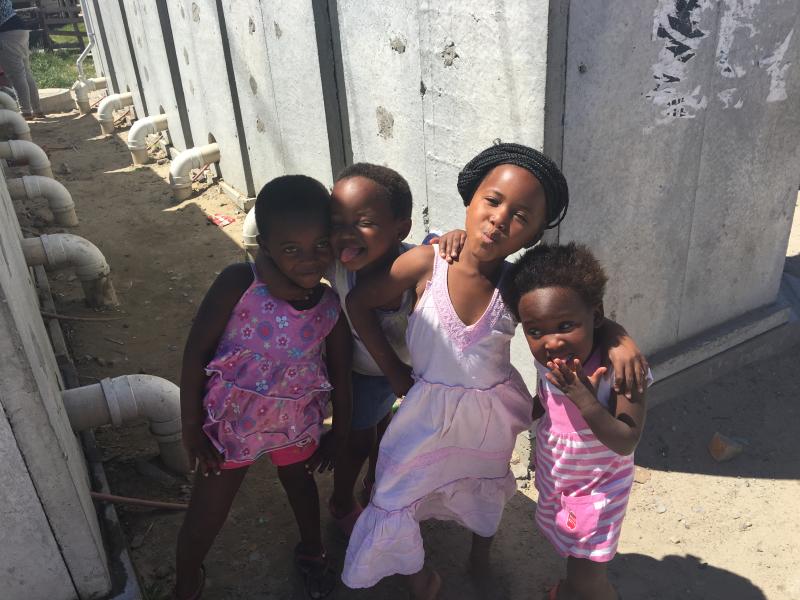 The kids in the photo live in Khayelitsha township with 1 million other people. It’s about 40 miles outside Capetown city, where the mostly white and some ‘new black elite’ people live. We had a great laugh with them today when we walked round the tin shacks they call home.

Khayelitsha has homes which are at least 20 years old. It is classified as ‘temporary’ by the South African government and therefore not worthy of facilities, amenities and the considerations other privileged, city based South African’s take for granted.
If you take matters into your own hands and build for your family or community the Government will send in the dreaded ANT’s. These are armoured cops in tanks who destroy it all lest someone get the idea that life here was meant to be sustained and permanent.
And so, 1 million people live in what Justin from the Social Justice Coalition called ‘forced perpetual limbo’. They travel by the hundreds of thousands every day and night in and out of a city that uses them for cooking, cleaning, and caring for every need of its wealthy inhabitants.
I understand now what Charnelle from Bromwell Street meant when she said they should all strike for just one day and the city would ground to a halt.
The existence of these massive shack filled camps plagued with murder, disease, rape and gender based violence, is incomprehensible until you walk through them and speak to the people. Everything has an explanation and nothing is accidental or beyond control or remedy.
Ntombi, an organiser with Ndifuna Ukwazi, and and Ma’am Q an organiser with SJC took us round on the ground today.
In the face of all the hardship they are organising electricity, toilets, jobs, healthcare, education, registering citizens with ID, intervening in the budget allocations, holding cops, ministers and officials to account. They have reshaped the place they live in to start meeting the needs of the people despite the Government.
At the same time Ntombi and others are set to Reclaim The City sites which could house people in good quality homes close to all the facilities everyone else takes for granted. She goes to court soon because she dared to draw messages in chalk on the affluent waterfront promenade. Cops came to Ndifuna Ukwazi offices and hit her with a bill she refuses to pay. And fair play to her. How is drawing messages about poverty in chalk outside the largest shopping mall in South Africa an offence? Yet, no offence is considered to be committed and certainly no one arrested when millions are forced to live, suffer and die in tin huts because of government policy.
The South African Government have many excuses and blaming people is high amongst them. Most of the people in the townships are trying harder to live with and love each other than anyone in the city. At the same time they are at the mercy of gangsters in government and on the streets.
The gangs on the streets are better organised than government and fill the gaps they have left to try to keep control. For example, some gangs pay for the education the government will not pay for, an issue over which thousands of students have taken to the streets while we have been here.
We talked to school kids at a public discussion last night who suggested that people listen to them for the answers to solving gangsterism and why not? One boy was for joining a gang for protection after he was stabbed in the face. He didn’t and became involved in community organising instead. He had travelled 40 miles to speak to packed room of South African’s of all class and colour in the ‘safe city’ about the issues his community faces.
His story and the kids in the photo are the real story of South Africa. They have never known this historical thing called ‘Apartheid’, yet they are enslaved in ‘perpetual forced limbo’ and have never known freedom. They have only ever known exploitation and inequality created by the multinational illegal and legal markets which profit from their sustained misery.
‘My generation have messed things up’, were the sobering words from Zakes Mda, a clearly highly respected elder, when we heard him speak later in the day.
He spoke from an oasis of calm, which is the new Isivivana building in the heart of Kayelitshya. The man, who named it Isivivana (Khosa for Cairn – a place for every traveller to leave their mark and stone for luck), and had lived through it all, had some hard truths for the audience of mostly young organisers.
He pulled no punches when he said that even Nelson Mandela had failed to challenge a culture which allowed corruption, greed and power to run rampant and sideline the needs of millions of people in favour of sustaining the power and egos of very few men. That failure, to hold power to account is what he implored this new generation not to allow to continue or to prevail.
Isivivana is an amazing new building, in the centre of one of the hardest environments to organise on earth. It is packed with slick activists with legal, policy, organising and campaigning know how and they are not afraid to speak truth to power or take action to challenge it.
They have already built homes, schools, treatments and education programs. Most importantly the have started to build an alternative to the old order in the thousands of organised people across Khayelitsha and other townships.
They know their rights, they know what’s wrong and they are coming to build a new Capetown.