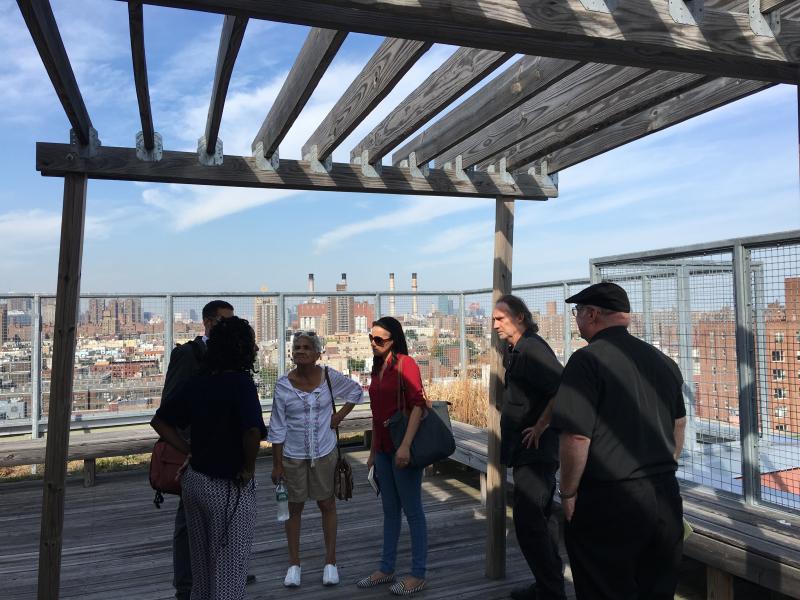 Today was spent East side with Winston, another of Frank’s colleagues who organises ‘Manhattan Together’. Like Jersey Together they are an affiliate of the IAF.  The day started with a follow up meeting between Winston and the local Parish Priest Fr. Sean.  This was regarding previous complaints from public housing tenants throughout the area made to NYCHA [New York City Housing Authority] around maintainence issues, heating, dampness etc. They had organised a monitoring system (not unlike the system used with residents from the seven towers) to hold this public body accountable for these repairs. It was reported that 55 of the 243 complaints have been sufficiently resolved. Winston explained it was not enough and they would continue to monitor these issues as well as NYCHA’s actions.

Winston had also invited me along to an initial meeting betwen an organisation known as Breaking Ground, the local parish priest as well as parishioners, residents and activists. This meeting occurred due to the group identifying a vacant church in the area which they wanted earmarked for low income housing.  Like the people we met in Brooklyn and Jersey they were concerned with the lack of low income housing, the rise in homelessness and the growth of private luxury apartments in and around the area.
Breaking Ground are a charity who provide a range of different solutions to homelessness for people which includes supported living, shelters, safe havens, low income housing and affordable housing.  We met and took a tour of their ‘Lee’ dwelling.  Built in 2010 it has 262 units. 104 are used to house formerly homeless single adults many of whom have special needs, 103 for low income working adults as well 55 supported units for young people transitioning from foster care into independent living. Breaking Ground’s largest dwelling is a former hotel known as The Times in Times Square which provides 652 low income affordable housing units for homeless/formerly homeless adults.
Alongside providing housing solutions for people Breaking Ground have a street outreach team known as ‘Street To Home’ and their outreach worker explained that over the past ten years they have provided some form of assistance to over 3000 chronically homeless people living on the streets of NYC.
Winston along with members of the group facilitated an open discussion regarding the Church building and accompanying land. They asked if something like the Lee building and others by Breaking Ground could be replicated, facilitated and maintained on that particular sight.
A bit like the residents of the Equality Can’t Wait group after such meetings, each person left with a task/follow up action.  Fr. Sean had agreed to host a meeting with the Arch Diocese regarding the selling of the church in early October and the workers from Breaking Ground were to set up talks with their Developers. The activists had pledged to do their bit i.e. letters to the Arch Diocese outlining the need for low income housing as well recruiting other residents and groups within the area.
I have planned to keep in touch with the group. I’ll be following their struggle with great interest with its many similarities to our own battles currently in the Equality Can’t Wait campaign back home.