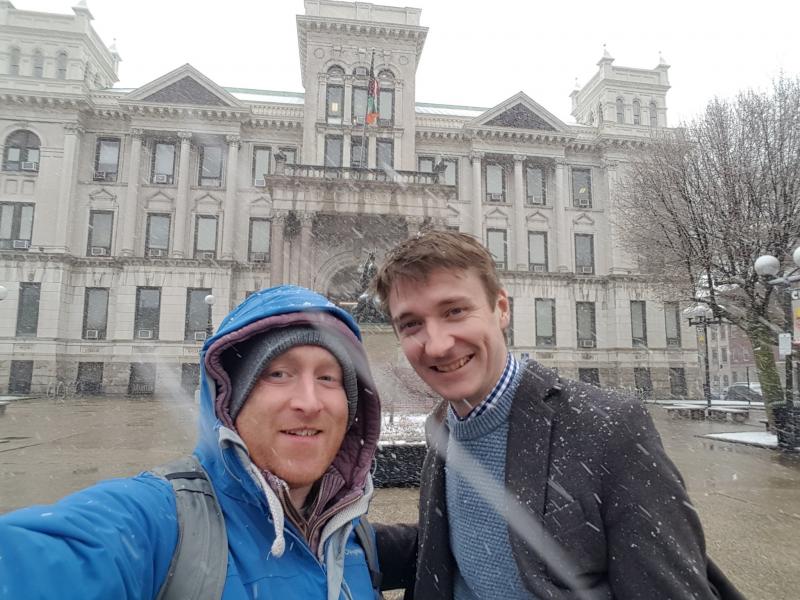 So what has happened since last Marisa and I were in the USA?

I thought with this being my third international trip, albeit alone, it would be more run of the mill with less to see and hear. Not so. Because of the organising pace of former PPR activist, Mr Frank McMillan, I have not yet had a chance to write a blog. This one will not do justice to the insights he and others have given me in just a few days moving through the diverse streets and neighbourhoods of Jersey City and Morris County.
My first meeting, however, was in New York with a friend from South Africa, Brad Brockman. He is currently travelling the world courtesy of the Social Change Initiative observing youth movements. I met him in Wicklow. He came to visit us in Belfast with Palika Makam (another talented activist putting media to use for social justice campaigning). Palika has hooked me up with good people in New York too – joining the dots all round. Thank’s Palika!
I met Brad all too briefly in Manhattan before he made tracks to Guatemala.
He has been embedded with young people organising on issues of race, class, power and resources across four continents by my count. He cut his teeth in South Africa campaigning for decent schools and education with Equal Education. We met some of their activists when we visited the Western Cape a few months ago. We have begun writing up our understanding of the impressive and fascinating story the Treatment Action Campaign, Equal Education, the Social Justice Coalition and our good friends in Ndifuna Ukwazi and Reclaim the City and how they all interface and evolve together.
Two hours walking the streets of Manhattan with Brad was an education and a half and I can’t wait til our paths will cross again. After an exchange of books and a comradely hand shake-stroke-hug it was goodbye Brad and hello Frank.
Frank, the Jersey City Together organiser of the Industrial Areas Foundation, with his 6am starts and 9pm finishes is something else!
These last few days I’ve lost all track of time and space as we covered many miles to meet with trade unionists, residents, activists, accountants, architects, developers, leaders, teachers, pastors – all now in the orbit of a powerful social justice organisation built by Frank and the people of Jersey City from the ground up.
The non partisan coalition of more than 30 religious organisations with thousands of members across Jersey City and Hudson County are taking on homelessness, unaffordable housing, over taxation, poor education, unaccountable policing, slum landlords, poverty and violence in a sophisticated and effective way.
Built over three years with patience and discipline, Jersey City Together has grown into a force to be reckoned with commanding the attention of the powerful. They are now delivering affordable homes and diverting resources to tackle the problems identified by the ethnically and economically diverse people who populate the Mosques, Synagogues, Churches and Chapels of the city.
He got me a few pints and let me crash in his house, which makes me bias, but I think Inez Mc Cormack would be well chuffed with how a guy who started organising with PPR on the Shankill Road has come to be doing what he is doing here every day.
Tomorrow I’m out with Frank again in the morning, meeting some interesting Chicago based activists in the afternoon and figuring out how to get to Boston in a blizzard in the evening.
Oh yeah – a guy called Donald Trump is now president too. You may have heard of him.